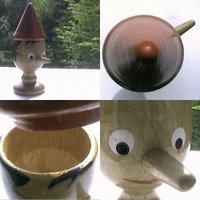 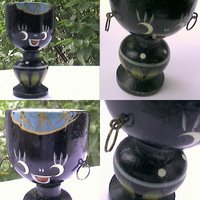 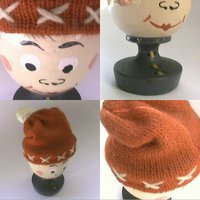 All men are equal, but this does not imply that all anthropomorphic wooden egg cups have to look the same. On the contrary, we have here a perfect example of how can a very, very simple idea be declined in a myriad of ways to render unique your little (or not so little) egg cup.
Details to be considered on the featured pieces: 1) representing Pinocchio and including a wooden hat, bought in France in 1993 [eggcup1075]; 2) hand-painted, with metal earrings [eggcup2490]; 3) hand-painted, with woolen cap, bought in Italy in the 1980s [eggcup0011].

Please remember that there is also a nice antropomorphic wooden egg cup signed by Cecilia Brugge in the Figural wooden egg cups post.
Posted by lahuev at 15:03 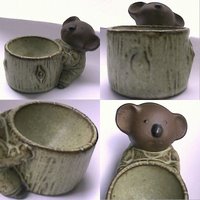 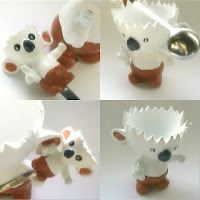 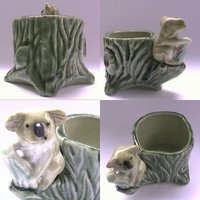 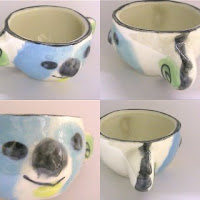 Koala time! Well, some of these could be considered to be ALSO souvenir egg cups, but in any case they do fall in the category "egg cups featuring nice koalas", don't they?
Interesting data: 1) beautiful egg cup offered in 1987 to the collector by the Aikin family, from Australia [eggcup0676]; 2) resin egg cup produced by French company Silea [eggcup3915]; 3) fine china egg cup produced by British firm Wade [eggcup4170]; 4) hand-paited, signed "F.P." and "Aust." [eggcup2293]